Francesco Santini was born in 1971 in Empoli, a small city in the Tuscan coutryside near Florence. He was brought to bonsai art by his late father Renzo when he was still a teenager and he self-taught for the first ten rookie years.

Later on, in 1996 he and other bonsai enthusiasts lay the groundwork for the establishment of a local association of bonsai amateures Gruppo Bonsaisti Medio Valdarno, where he had the possibility to bolster and heighten his enthrallment for the art and practice of bonsai.

A new chapter of his journey began in 1998, when he attended classes, seminars and workshops delivered by Kunio Kobayashi, Carlo Cipollini and Walter Bondi. These experiences boosted his growth in bonsai practice and art, which eventually led him to join the Bonsai Creativo School of Sandro Segneri in 2001.

Today, indeed,  Francesco teaches at the same School, delivering Bonsai 101 courses and more advanced ones, besides, he specialized in design & aesthetics. From Sandro, Francesco learned a cultural and emotional approach which enhanced his technical, botanical and artistic expertise, becoming a certified IBS instructor in 2009.

He won several awards including “New Italian Talent 2004”; many of his works have been selected to be shown on several magazines and catalogues. As a bonsai artists he has performed in most national stages solo or assisting masters such as Shinji Suzuki, Kunio Kobayashi, Minoru Akiyana and Min Hsuan Lo in their demos.

Francesco travels frequently, both to attend important exhibitions as a demonstrator, speaker or judge and to fulfill maintenance assignments. He is the curator of several private collections, including Gianfranco Giorgi’s, one of the Italian bonsai pioneers, and Costantino Franchi’s Bonsai Museum, whose exhibition includes several works by masters like Masaiko Kimura, Kunio Kobayashi, Shinji Suzuki. 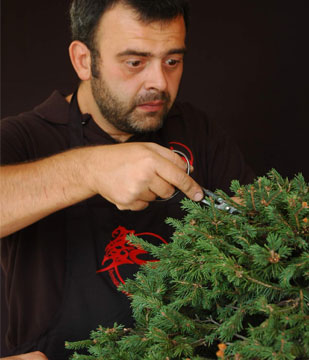 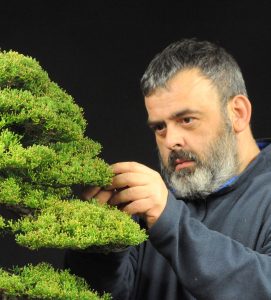