I have been growing this cypress bonsai since 2000, when I bought it from a local collector. I was immediately intrigued by the highlight of this tree: its narrow curve at the base. In addition, both the strength of the vegetation and it being cultivated in a box made me think of abundant, strong roots.

My approach is to cultivate any new tree for one year at least, before starting to work on or style it. Consequently, I proceeded with the first styling on May 2001.

The narrow corner of the base made me immediately think of a cascade style. In fact, if you rotated the box vertically, the downward and soft movement of the trunk immediately appeared.

As a consequence, the tree apex was moved to the lower branch. Instead of removing the other large, cylindrical branch, I made a shari of it on the trunk.

The first branch is then created with a secondary branch carefully covered with raffia and bent so to give movement and continuity to the whole.

In this first styling phase I did not care much about the position of the vegetation, as I am mostly interested in the correct arrangement of primary and secondary branches.

In September 2002, the vegetation was abundant and vigorous, and the time came for the second styling. First things first, I got rid of the vegetation at the top; this way it was possible to highlight the first part of the trunk even more and get ready for a refined movement to the cascade-style bonsai.

Wiring and styling of the branches concluded the work.

The tree, although in a box, had grown at the right angle. With a stream of water I progressively got rid of the soil above the nebari line in order to weaken the roots at the top. This way the plant, without suffering excessive stress, will abandon these roots, strengthening those at the bottom which, moreover, enjoy more humidity.

The vegetation was then thick and vigorous. To obtain it, it was enough to let the cypress vegetate freely during the whole spring season and then shorten the tips, leaving only two tufts of vegetation: it is the same technique used with broad-leaved trees. I avoided the repeated pinching with my fingers because the cypress responds with less vigour. Pinching, in fact, must be done only in an advanced state of cultivation and, above all, it must be done regularly during the growing season.

The cypress is a very vigorous plant but reacts definitely better to styling operations when they are carried out with a certain level of continuity. Both unwanted roots removal and pinching are recommended to be carried out throughout the year. This way, the stress suffered by the plant will not be relevant and, ultimately, the vegetative response will be better.

In 2004 I proceed with the first repotting.

It is recommended to repot in late spring when frosts are virtually impossible, using a soil composed mainly of pumice, lapillus and a small percentage of soil.

In this case you still need a few more years of cultivation, so that all the branches are sufficiently lignified: for this reason a black cultivation pot will be used.

During the repotting, I cleaned the trunk area still buried near the nebari and discovered the base was straight and cylindrical.

Unfortunately, at the end of the trunk there were numerous active roots. From that moment on I pruned these roots at regular intervals, giving the plant the possibility to strengthen the roots near the base.

In 2005 the cylindrical trunk has no more roots, so I can proceed with its reduction. With a  pruning saw I shorten the part of wood that I will later work with manual tools. At the same time, I implement the third part of the styling. By then, the branches up to the third order was completely lignified and wiring was done with thin wires. From now it is important to create an orderly designed foliage pads, so to balance the positive and negative spaces. In the end, I was pretty satisfied with it.

By the spring of 2006 I proceed to repotting again: on this occasion I choose a very tall and narrow pot with smooth edges. The very narrow base does not allow the bonsai to be balanced, actually, so I have to add weigh with lead: for this purpose I used photographic films boxes. Filled with shotgun pellets and protected with insulating tape, they are excellent ballasts to be placed at the bottom of the vase, together with the drainage state.

In October 2006, after the vegetation has been reduced, the bonsai was exhibited at the Sosaku exhibition in Rome.

On that occasion master K. Kobayashi, besides appreciating the work on the cypress, was very intrigued and fascinated by this typical Italian tree.

However, I am not totally happy with the pot: it is too tall and cylindrical and does not go well with the sinuous movement of the cascade style. In addition, the height of the bonsai is practically identical to that of the vase.

I decide then, in 2008, to repot again the cypress in a completely different pot. The choice falls on a vase from the Czech Republic, square and with irregular colour and surface. The visual improvement is immediate. The plant appears more dynamic and in proportion to the new pot. The sense of stability is also improved.

In September 2008 the vegetation is too heavy for this bonsai and after an abundant pruning of the new vegetation, I wire for the fourth time, in order to expand the vegetation like the fingers of an open hand and manage the foliage pads properly.

The operation is carried out almost exclusively on the branch's extremities with a 0.8- and 1-mm diameter wires.

After the last pruning, the plant regained vigour before the winter rest.

On February 2009, the plant already had many dark, swollen tufts, which bodes well for a strong vegetative response in the coming spring.

Very often you can see whitish traces on the scales, often mistaken for cochineal. It is actually a resinous substance derived from normal vegetative growth.

In the future I expect a further definition of shari (especially on the base) and a cultivation aimed at creating a short and dense vegetation, typical of those specimens that grow on the edge of a cliff. 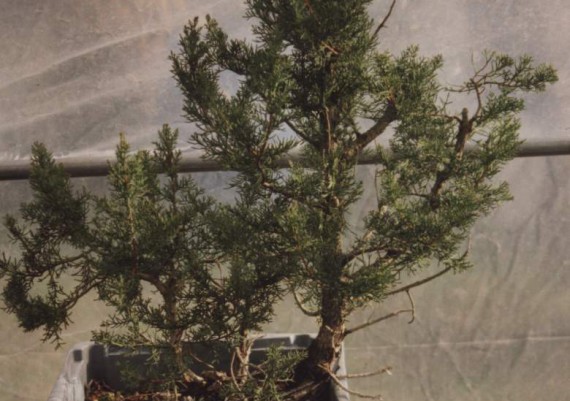 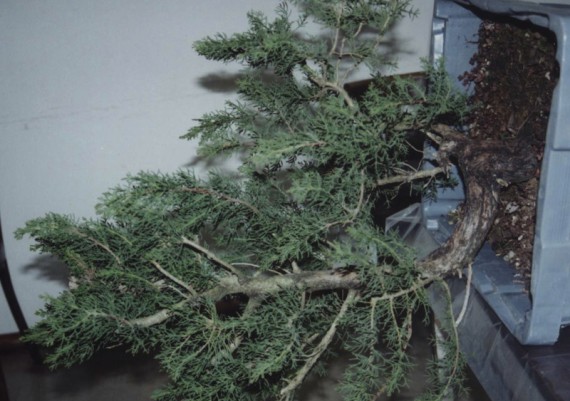 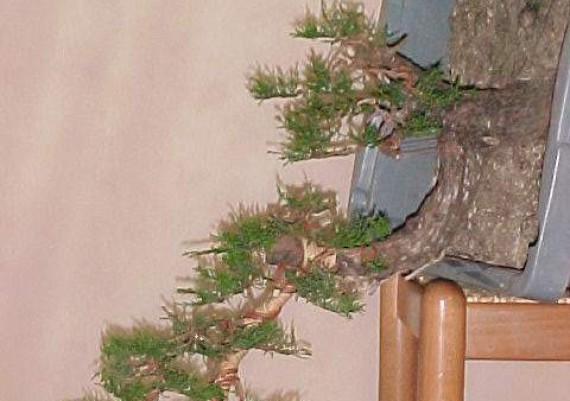 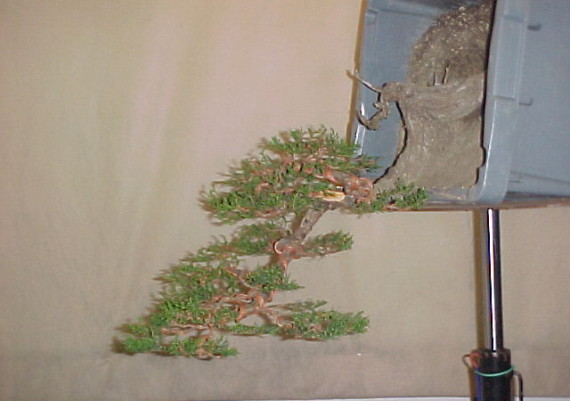 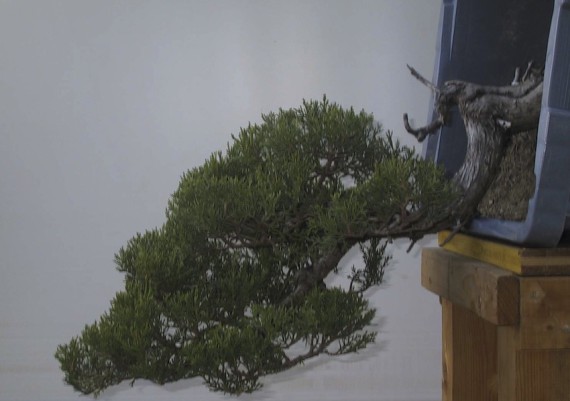 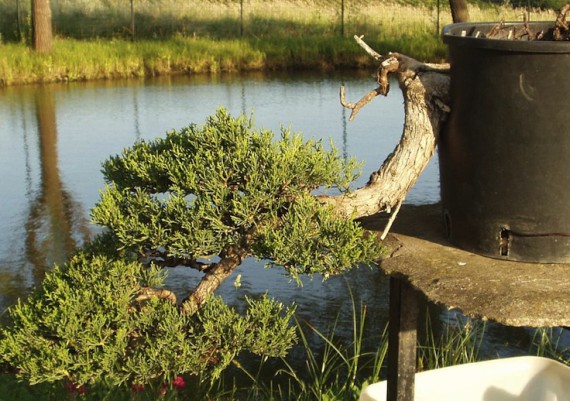 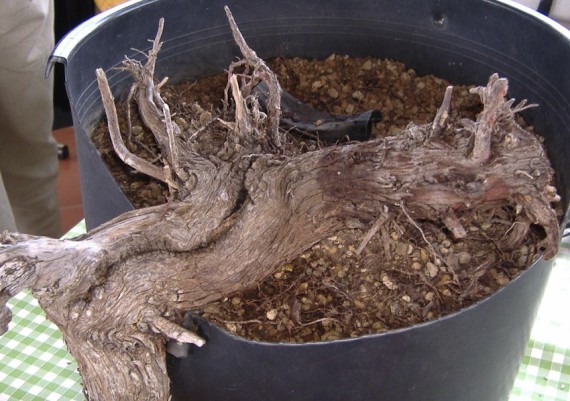 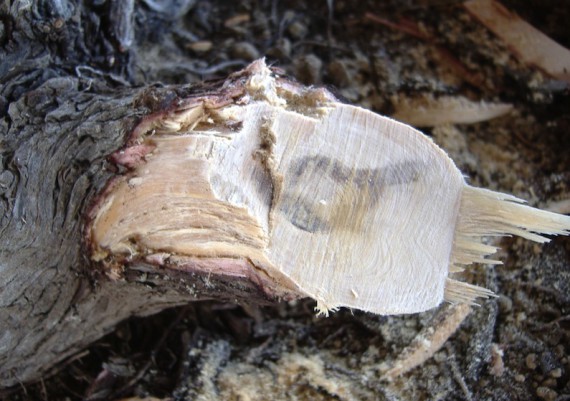 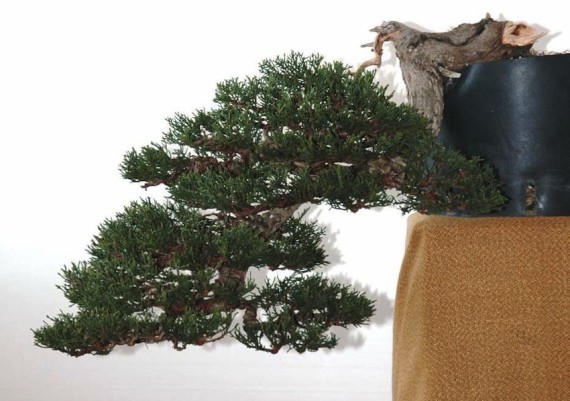 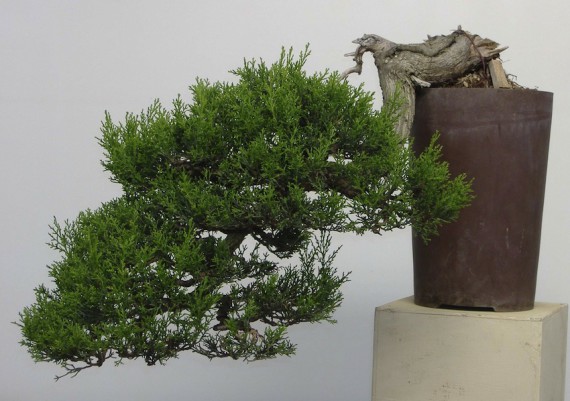 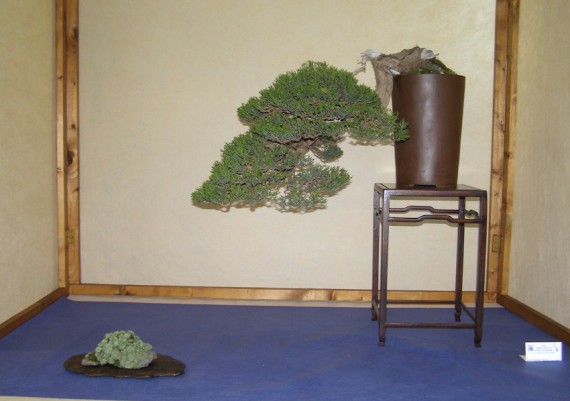 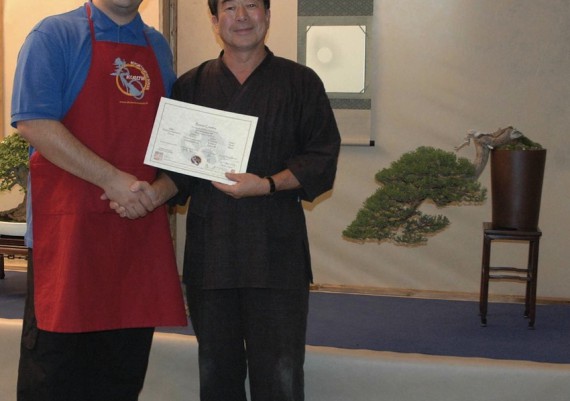 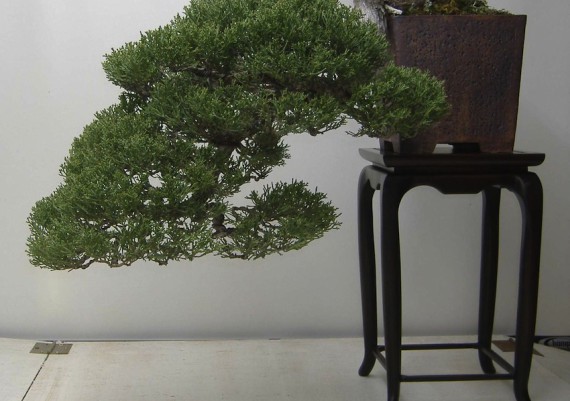 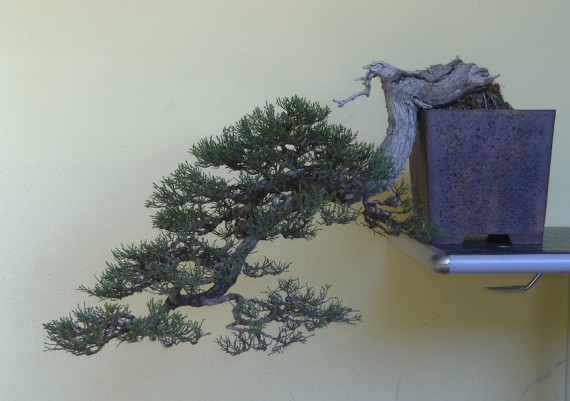 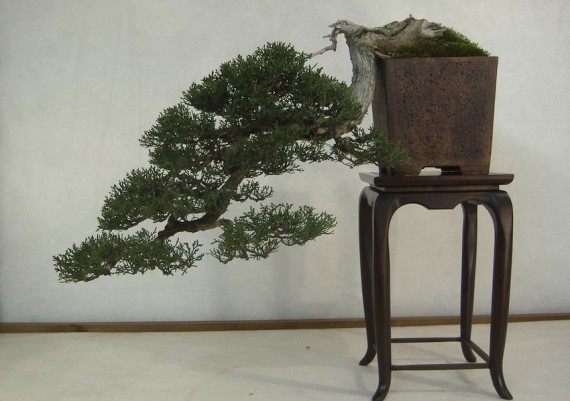 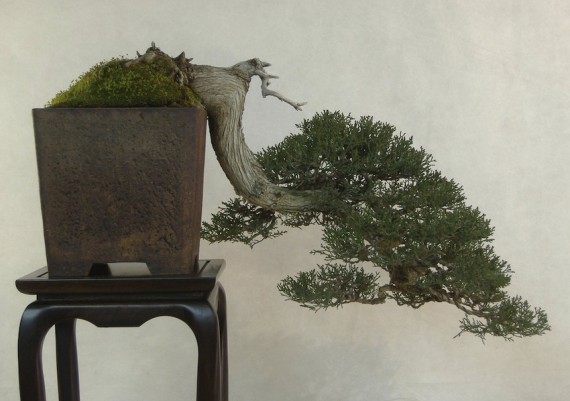 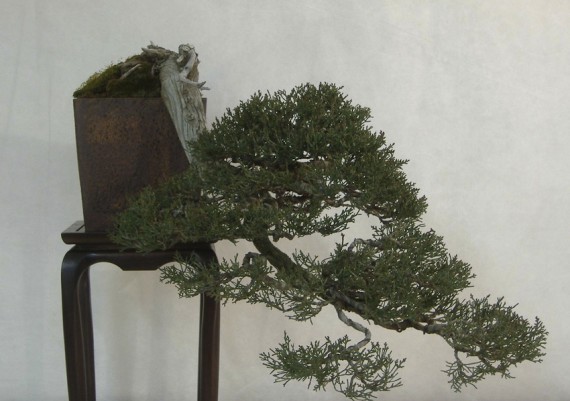 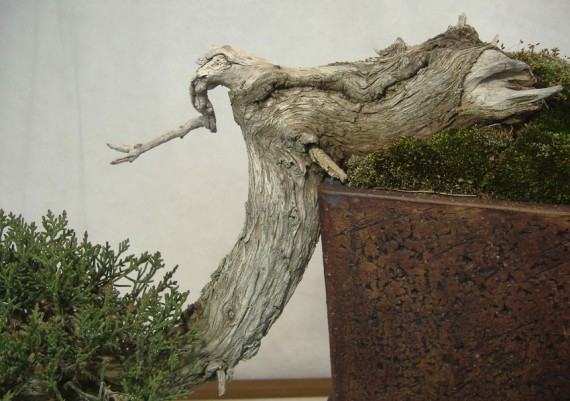 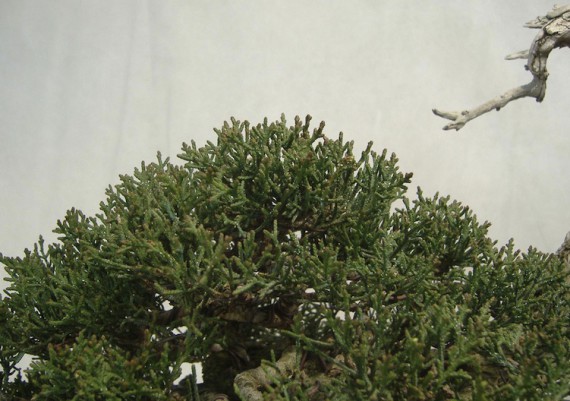 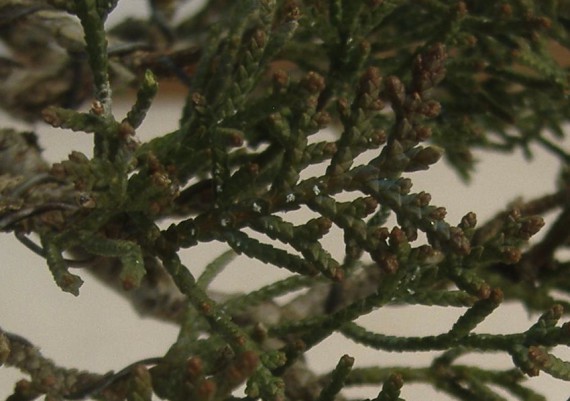 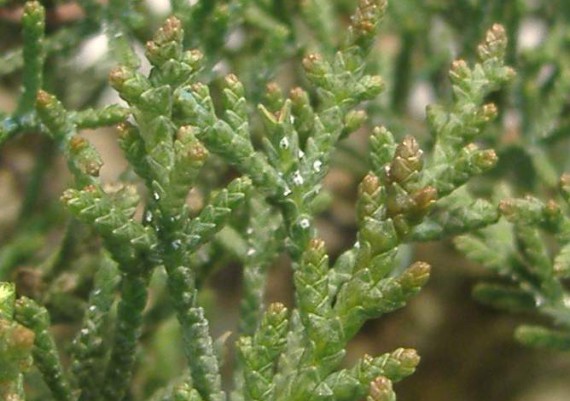 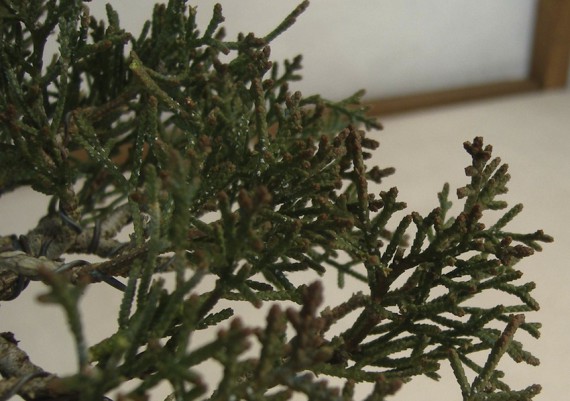 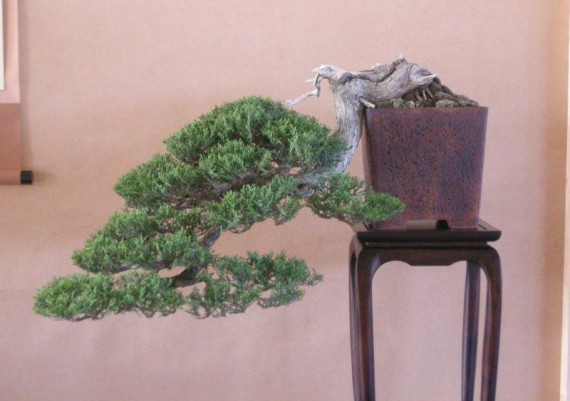 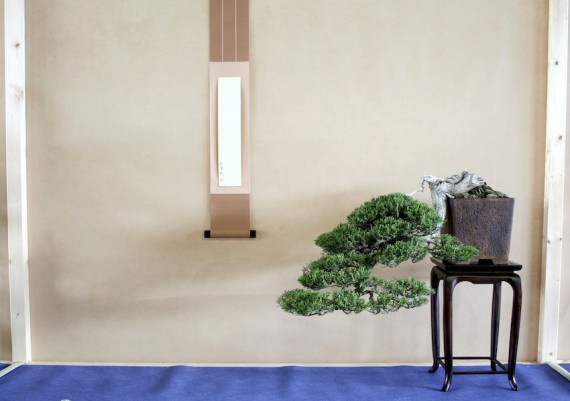 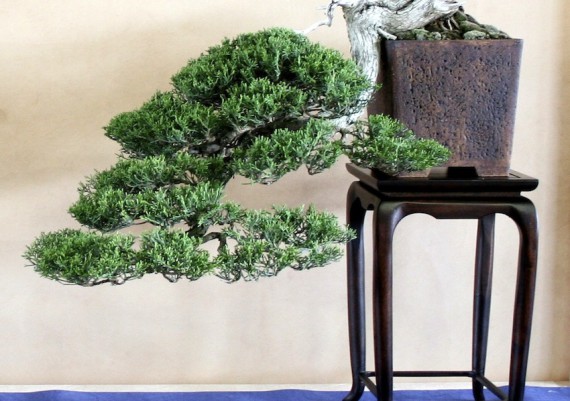